The restrictions that exist in writing the options (scenarios) in the MiHome system – as for example, the inability to track the current status of the devices, make us either to come up with the intricacies of self-disabling options (scenarios) or to shift to alternative systems such as Domoticz.

For example – if you want to switch a smart lamp to a nightlight mode at movement detection option, the following problem may occur- when the lamp is already turned on at normal mode.

A new  Xiaomi Aqara motion detector with a built-in light sensor can help with the solution (or you can use the switch of the script to Domoticz).

The device is supplied in in a white cardboard box.

The list of specifications are at the rear of the box. I would like to indicate some of them: 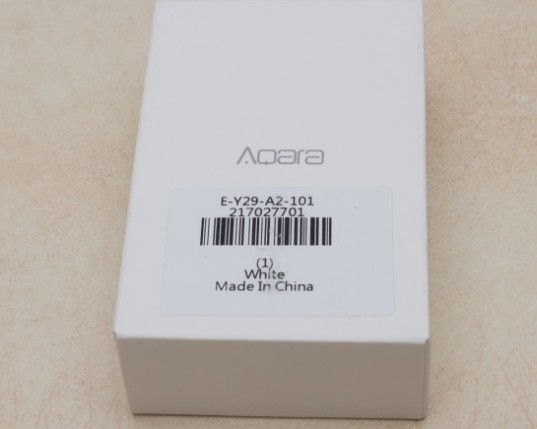 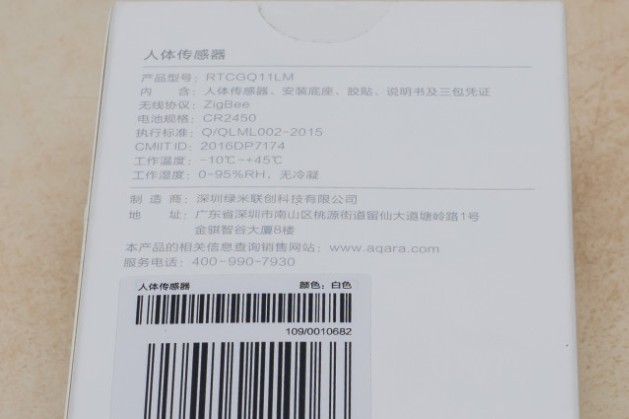 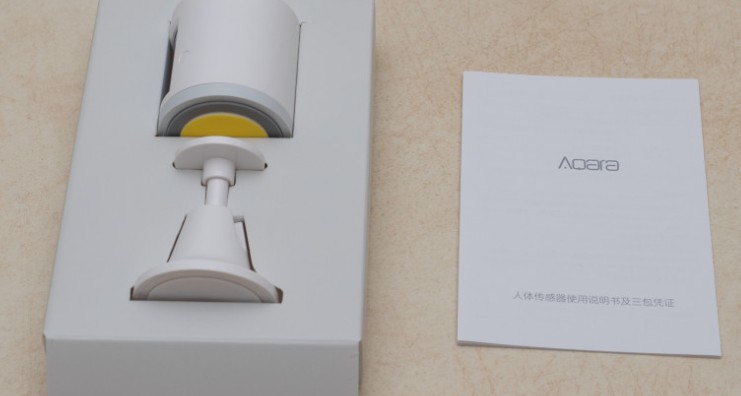 ZigBee  Work – you need a gateway (all Xiaomi AP wireless sensors and controllers operate through the gateway);
The CR2450 Battery is a relatively large round “tablet”;

The range of operating temperature and humidity is -10 +45 C and 0-95%;
The device is nicely packed in a special cardboard holder.

Supply includes: the motion sensor that does not differ from the previous model its shape, but now the mounting leg is attached to the device.

By the way, you can buy the leg separately at Aliexpress, that will help you to modify old sensors. 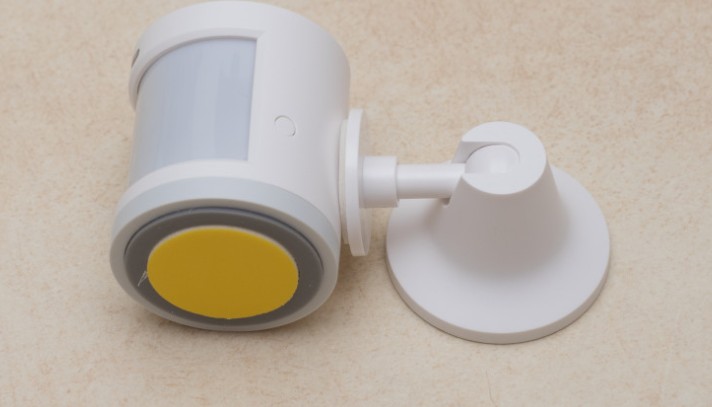 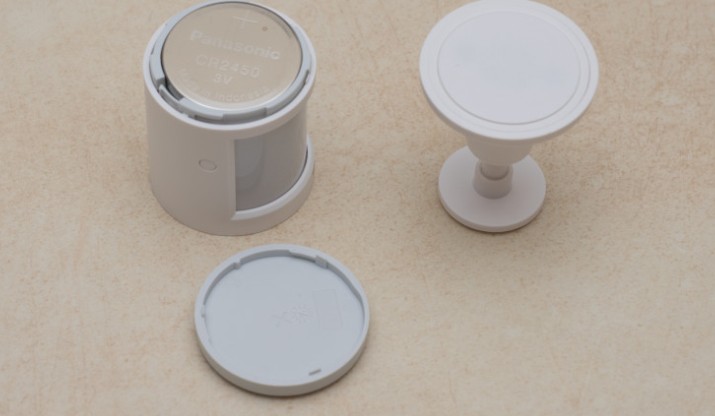 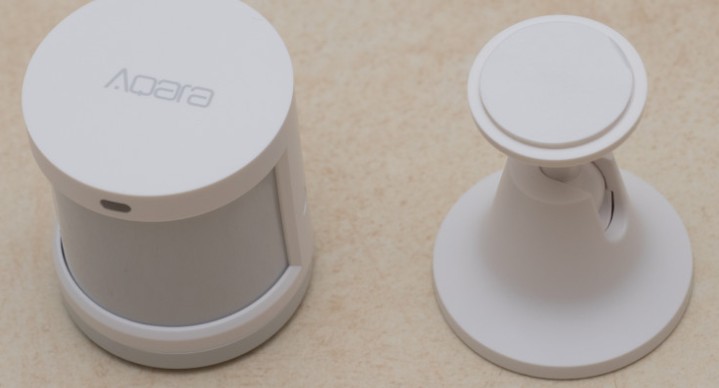 All the connections have to be carried out using the adhesive tape.

The synchronization button is now displayed on the case – now there is no need to press a paper clip.

The battery is under the removable cover – it is easy and convenient to change it, it is not necessary to tear it away from the fastening – the cover remains in place – just remove the sensor, replace the battery and put it in its place.

The leg allows you to rotate the sensor around its axis, guiding the sensor in the desired direction; it also can be bended at an angle of up to 90 degrees that is convenient for attaching to vertical surfaces.

The sensor can be attached without a leg – just with a cover, with the help of a complete adhesive tape.

If you plan to use the leg, you do not need this adhesive tape as the leg has its own part of the adhesive tape.

To connect the sensor, we should follow  the same scheme – Xiaomi gateway plug-in, Add SubDevice, press the button on the side of the sensor and select the room and the icon.

The sensor does not have the separate plug-in – it only has a window with tow tabs- these are the list of options(scenarios) and work log. I will tell about the options(scenarios) later. There are lighting data in the work log. In the setting window ( it is the button with three dots on the top right) you can find the change of name, the sensor’s icon and see the report on the levels of illumination in terms of days, weeks and months. 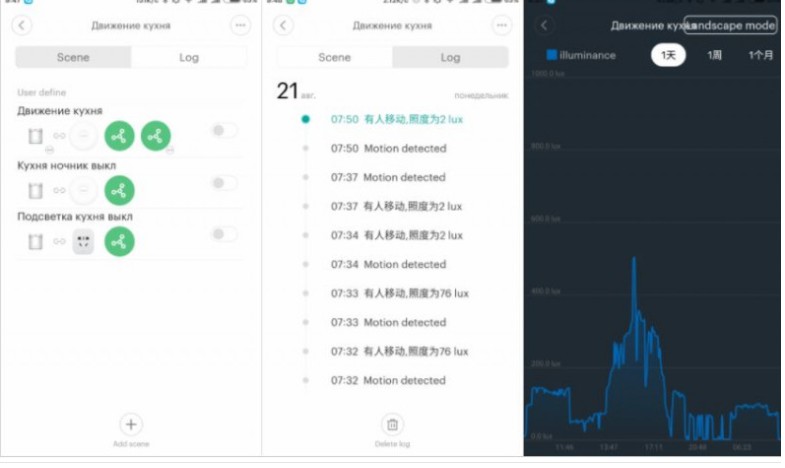 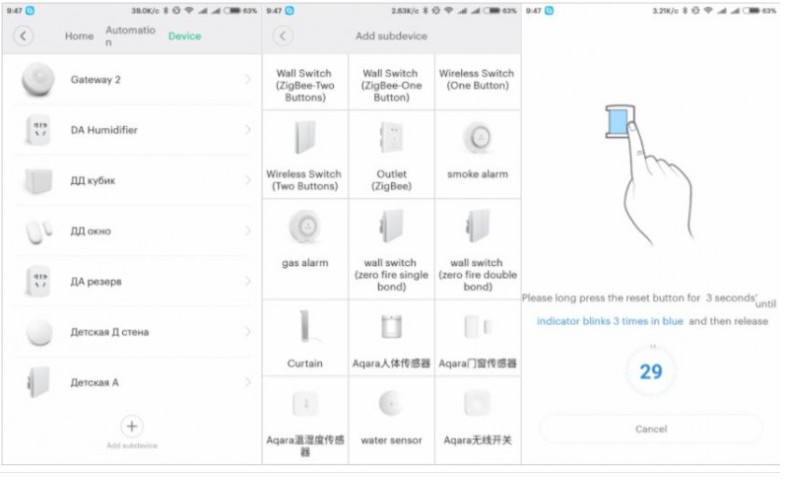 The sensor can only participate in the options (scenarios) as a condition, and besides the usual conditions such as the detection of motion and lack of movement for 2, 5,10, 20 and 30 minutes – it has one more condition – to detect the movement in the dark.

The sensor has already appeared as a motion sensor and as a light sensor in the Domoticz system (but there is no video review regarding this sensor). But if you do not have a Xiaomi Philips chandelier -you will have to work with a bunch of scripts.

You can buy this sensor from following links:

Buy from Amazon
Buy from Aliexpress
Buy from Gearbest