Buy from 20$ on  Aliexpress Gearbest JoyBuy

In this review I am going to share my impressions regarding Xiaomi smoke detector, designed to work in the ecosystem of the Xiaomi smart house.

The smoke detector together with a gas leakage detector, produced in cooperation with a well-known Honeywell company, were introduced on the market long time ago.
The box, the set and the delivery of the smoke detector.
Externally, everything corresponds to the canons of Xiaomi devices – a white cardboard, a gray printing and an option with a photo on the front side.
On the rear side of the box there are technical characteristics among which It is worth to mention the ZigBee (the gateway is needed) interface with the size of 90 * 90 * 30 and with the power of – CR123A.

Let’s see what’s inside the box
In addition to the smoke detector, there is a battery CR123A, a plastic wall mount – to attach the detector to and a set of fasteners – a pair of screws and a double adhesive tape. 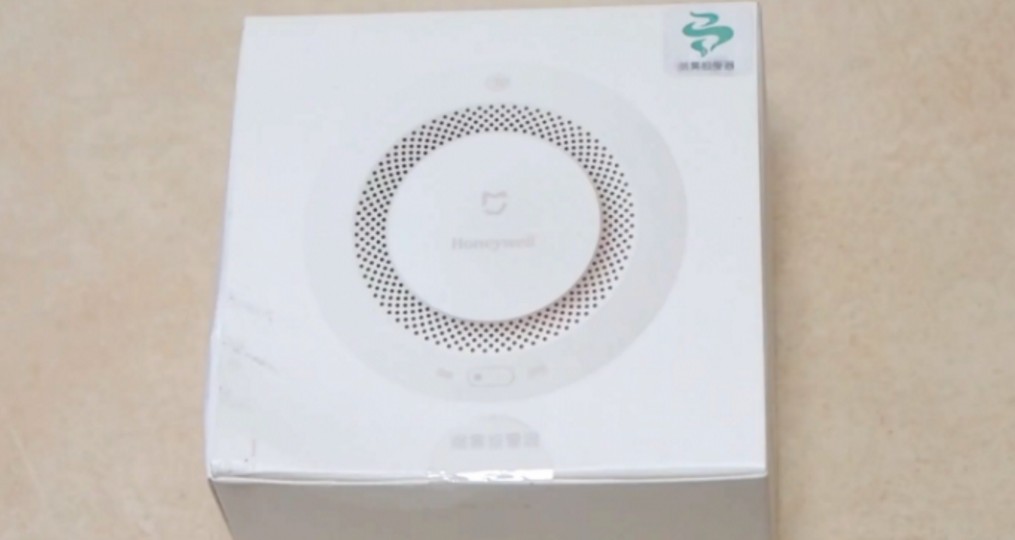 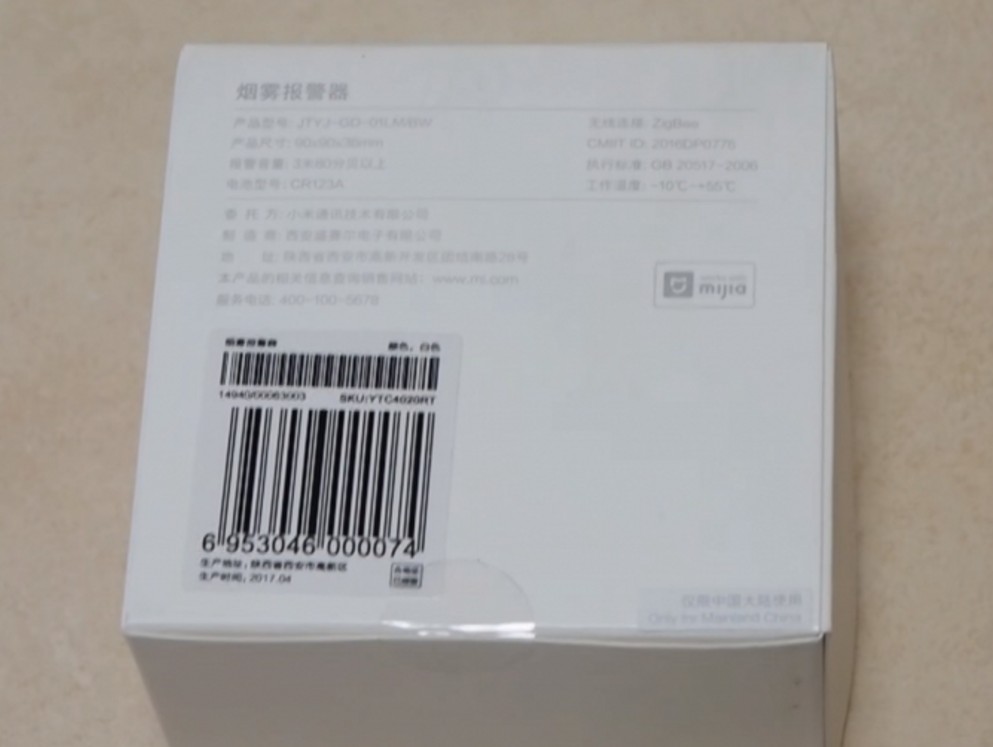 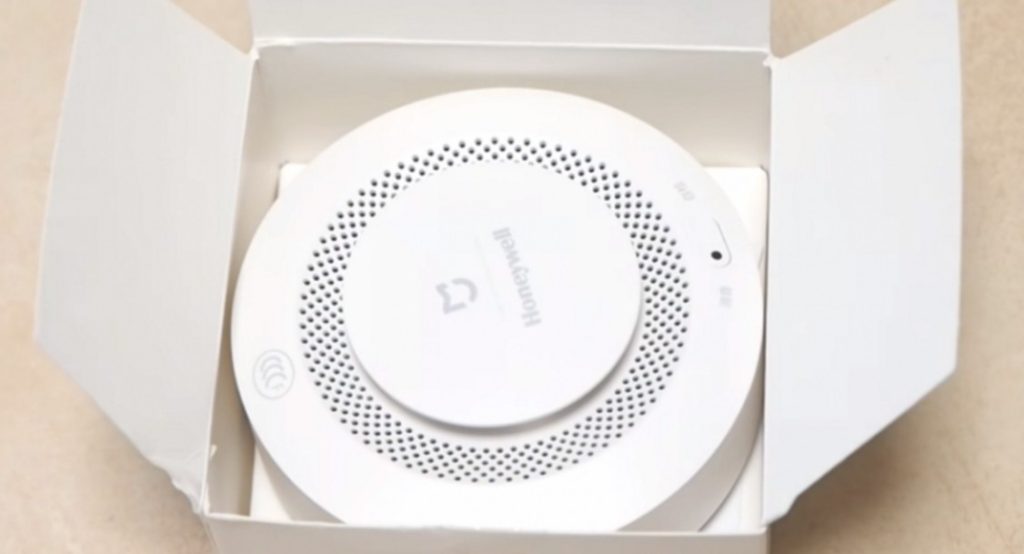 There is an air intake in the center of the sensor – it is used for the smoke content analysis.

The small holes of a very loud and nasty signal are along the circumference of the detector. The pairing button is on the front side of the device.
The weight of the detector (without a battery) is 82 grams.
There are attaching grooves and a compartment for installing the battery behind the device. 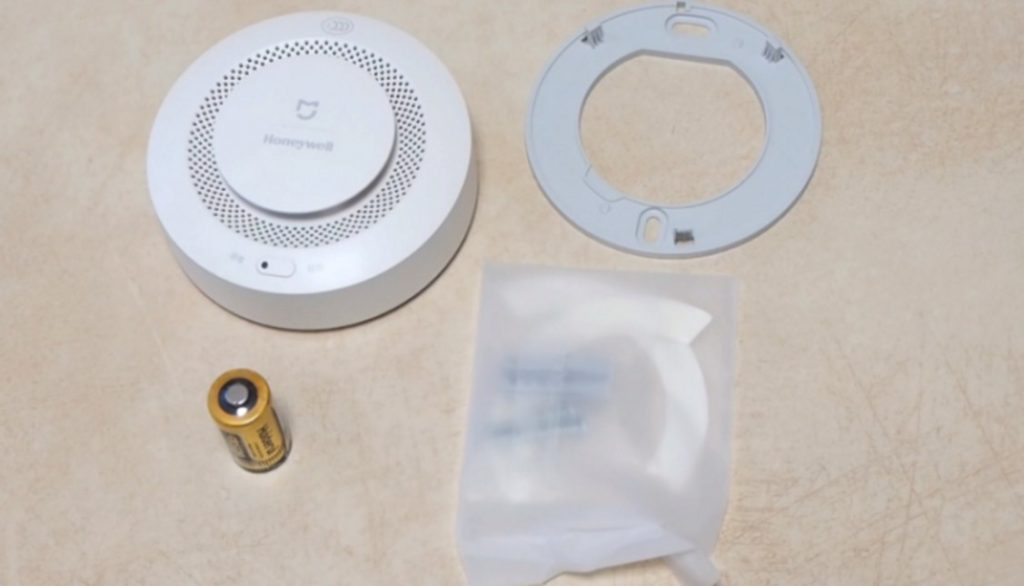 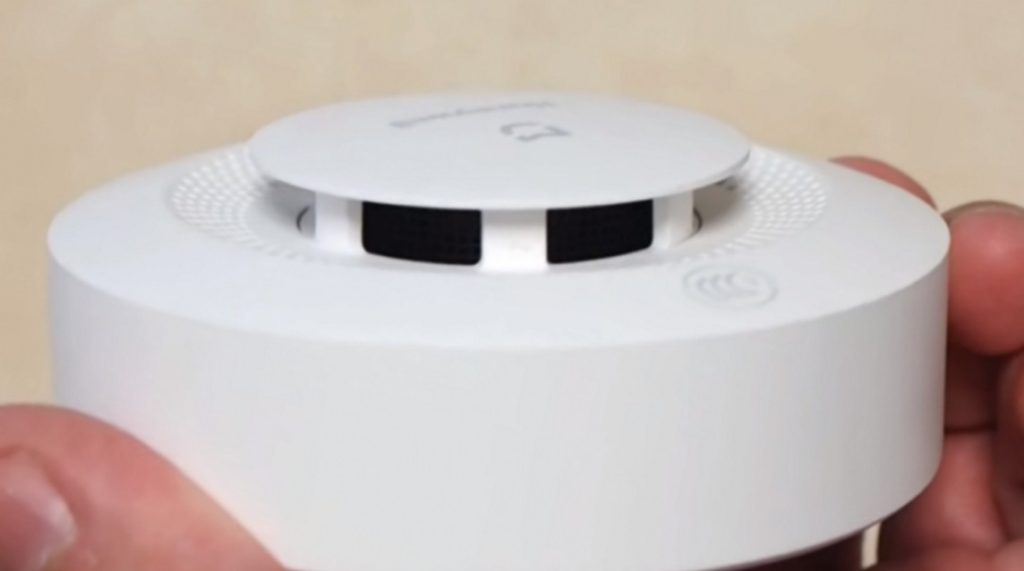 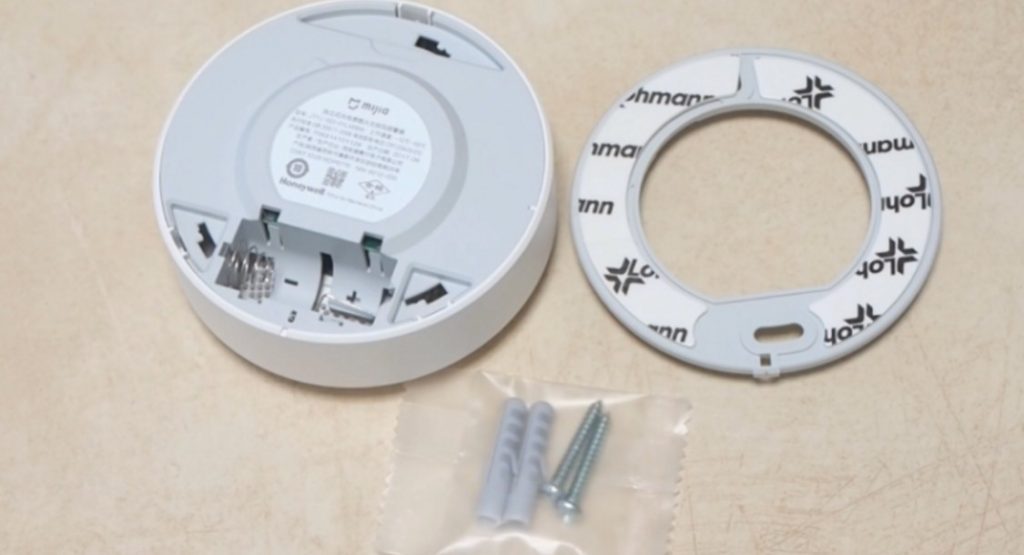 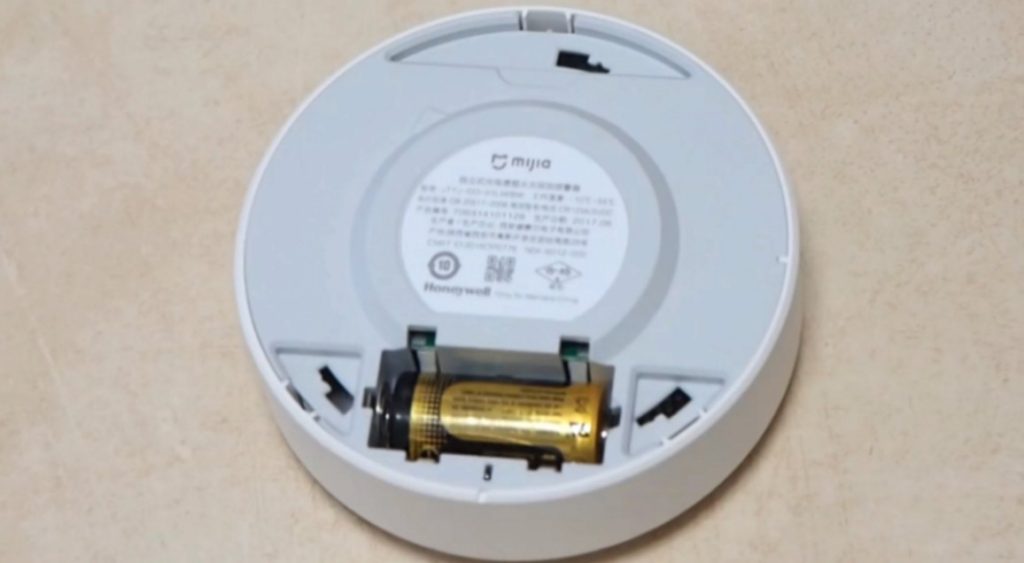 The cconnection process takes place according to the similar patterns: we start the gateway plug-in, select the detector from the table, press the button, and a minute later we have a connected smoke detector.
The detector does not have a separate control plug-in. It only has a setting window with two tabs – scripts and trigger log
Similar to buttons, wireless switches, motion detectors, openings, etc. – it only has a settings window with two tabs – a scripts and a trigger log . 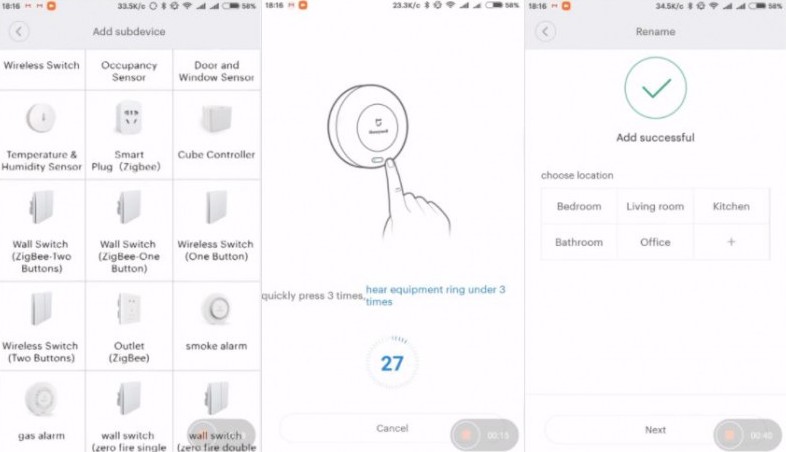 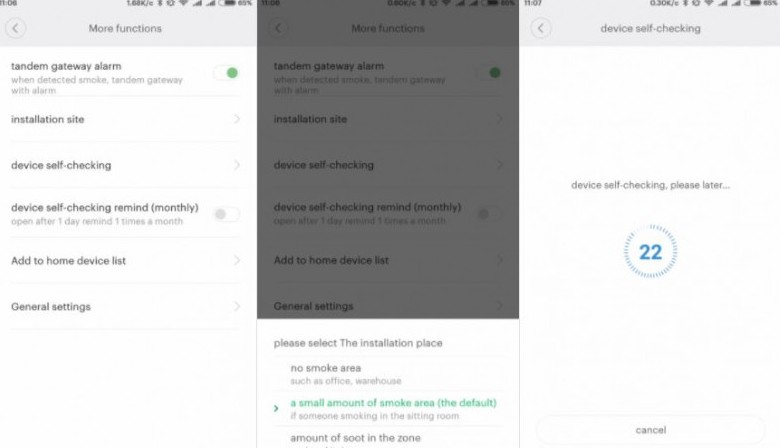 In scripts, the device can only be conditions and has a single option – triggering(actuation). It is not necessary to create scripts, it is quite enough to connect the detector to the gateway – and it will be activated as the alarm at the gateway – the set melody is played at the gateway at once, , the red illumination blinks and the control device (the smartphone/tablet) begins to receive the notifications of the fire alarm.

If such a script is not enough, you can add any script you like.

The “tandem gateway alarm” function can be deactivated in the addition settings menu – It is a function that activates the alarm at the gateway immediately with detector’s actuation. You can set the area of the detector’s location for the maximum sensitivity– the area without smoke, or you can set the middle area(by default) where you can smoke a cigarette, and you can also set the area of the least sensitivity- like a kitchen, for example.

There is also a self-diagnostic function in the device – if you have used it successfully, you hear a signal, the system can remind you about the need to conduct the function every month.

I have carried out a couple of experiments, which are fully described in my video review. The smoke of four lit and extinguished matches are quite enough for the detector’s gateway to be activated. The gateway connected to the detector turns on the alarm mode. The detector starts to make a growing alarm signal. The smartphone starts to receive alarm signals. 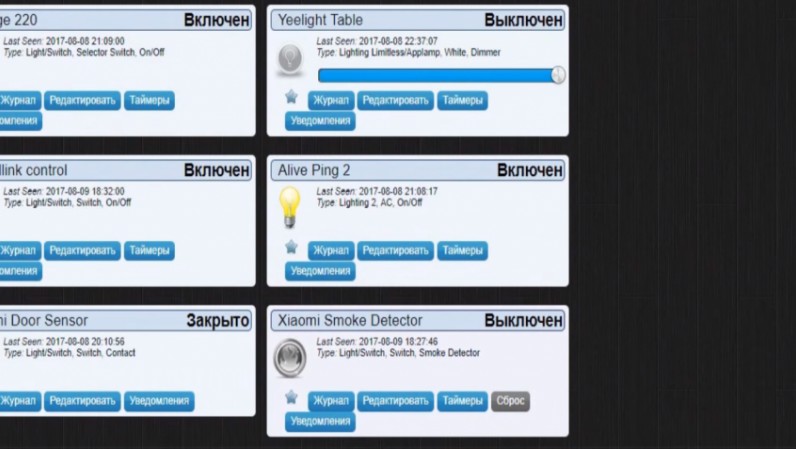 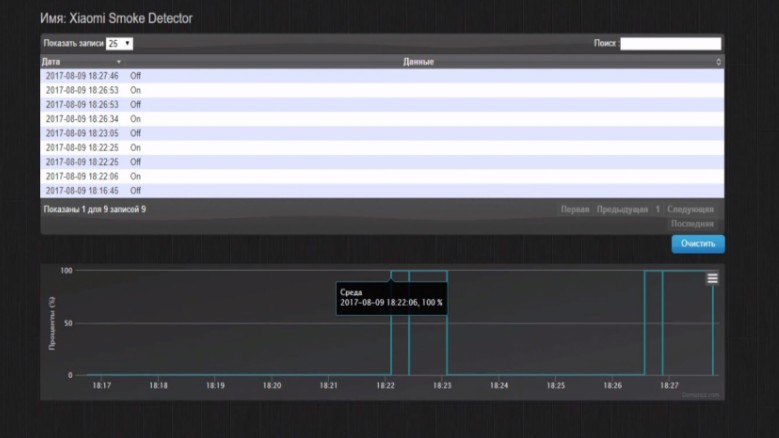 The sensor type is a switch, but with an additional “reset” button on the panel. In the log, it is displayed as On. In the normal state – Off.You can create a script on “On” term that means the detection of the smoke.

You can buy this sensor from following links:

Buy from Gearbest
Buy from Aliexpress